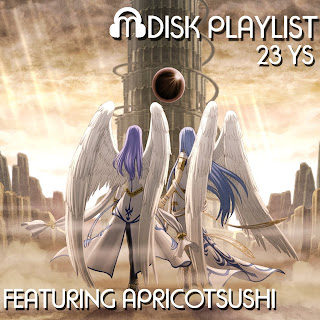 That's how Falcom's famous role playing game began (at least the Book I & II PC-Engine remake). And since then, its reputation as being a game with memorable characters, settings, and extraordinary music have grown and grown.  Returning champion Apricotsushi of the Chic Pixel blog joins me in discussing how influential Ys, and its music has been on gaming as a whole.

Please note, the quality will sound off here and there, and I do apologize for these issues. But, I am confident that this will be the last time I make this apology.

Also! At the time this was recorded, Ys VIII: Lacrimosa of Dana was not announced for release anywhere outside of Japan. Now, it has recently been announced that it will be localized by NIS America for release sometime in the fall season.

Subscribe to the M Disk Playlist via RSS Feed

Email ThisBlogThis!Share to TwitterShare to FacebookShare to Pinterest
Labels: mdp